TALLAHASSEE, FL – On August 3, Secretary Jonathan Zachem of the Florida Department of Business and Professional Regulation appointed five new deputy harbor pilots to Florida ports. Among them was the first female deputy-pilot appointee in nineteen years, Captain Dana S. Ryan, who was appointed to the Port of Palm Beach. Other appointments included Captain Travis Diemert to Port Everglades; Captain Niall Kennedy to Port Canaveral; and Captains Brendan Myers and Captain Kenneth J. Sears, Jr. to the Port of Tampa Bay.

“Deputy harbor-pilot appointments are extremely competitive, and candidates have rigorous experience and examination requirements,” Secretary Zachem said. “We congratulate the recent appointees and thank them for their service to help ensure the ships on Florida waterways, as well as our citizens and coastal environment, are safe.”

Deputy pilots are authorized by the State of Florida to pilot vessels within the limits and specifications established by state-licensed pilots at ports where deputies are appointed to serve. They must complete a mandatory apprenticeship before becoming full pilots authorized to guide cruise and cargo ships into Florida ports without supervision.

DBPR’s Division of Professions is responsible for licensing over 434,000 professionals, including harbor pilots. Housed in the Division is the Board of Pilot Commissioners. For licensing and application information, please visit the harbor pilots’ board page.

Detectives worked with the Sarasota County Building Department, the Florida Department of Financial Services Division of Insurance Fraud and the Florida Department of Business and Professional Regulation (DBPR) to contact individuals advertising home repair services that require a license to complete. As individuals arrived at the predetermined residence, the DBPR database was checked to determine if they were licensed, registered as a contractor, and/or required workers compensation coverage or exemption to perform the work they proposed to do.

In all, the operation resulted in 12 felony charges and 12 misdemeanor charges. Those arrested have a total of 33 prior felony and 33 misdemeanor charges as well as a combined 37 convictions. Two of the defendants, David Pond and Kim Bachert have prior charges for Unlicensed Contracting. Another, Nathan Poor, has charges dating back to 2006 for Domestic Battery, Resisting Arrest and Scheme to Defraud. The following individuals were arrested during the three-day operation: 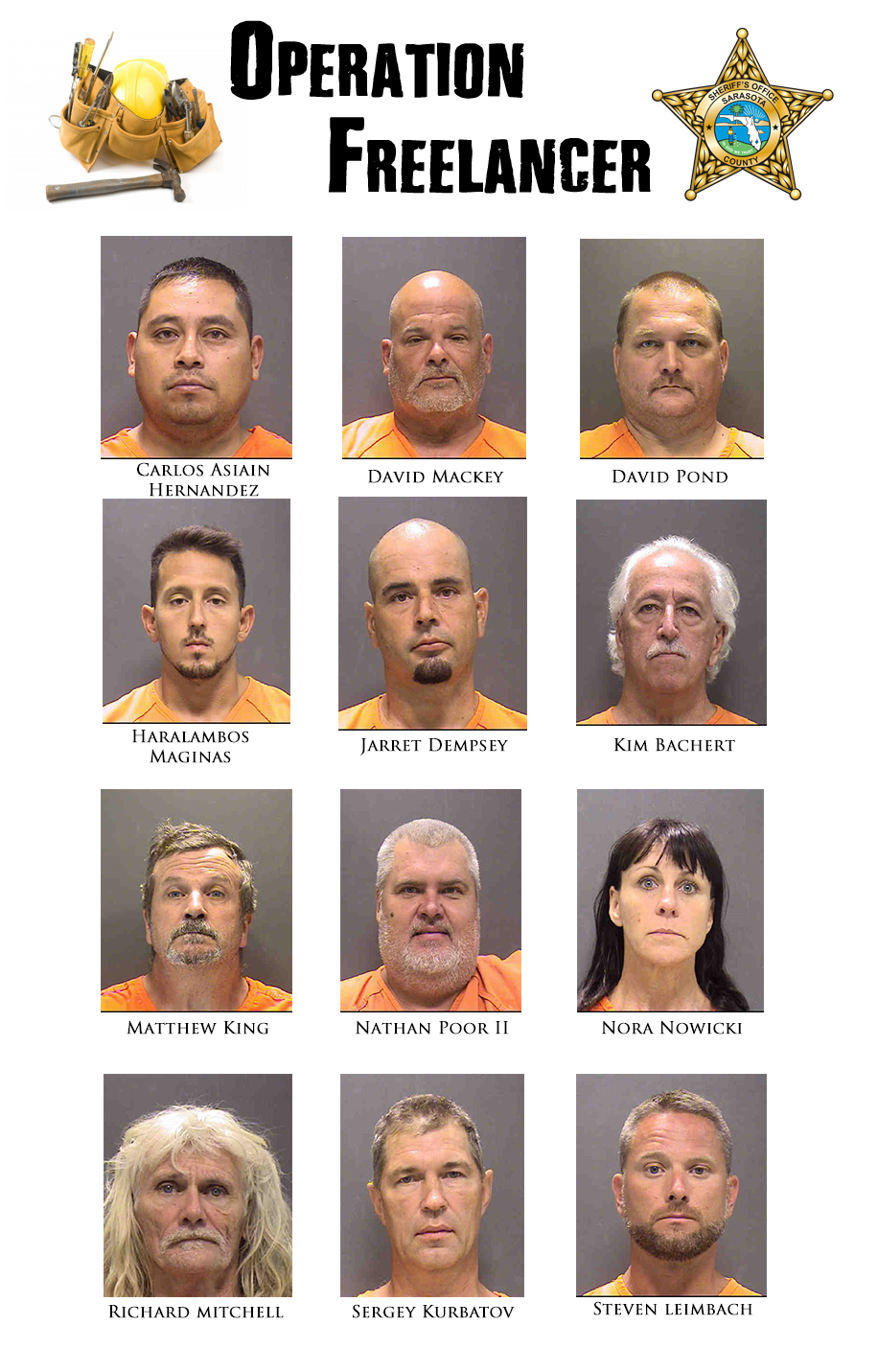 Since 2012, the sheriff’s office has assigned detectives to investigate claims against people who engage in contracting work without proper licenses, permits or certification. A first offense usually results in a civil citation by code enforcement but subsequent violations lead to misdemeanor or felony criminal charges. The defendants also receive a cease and desist order from the State of Florida.

“Maintenance operations like these should be a good reminder for consumers to always seek licensed contractors to perform work on their homes or businesses,” said SheriffTom Knight. “Consumers are exposing themselves to financial and physical risk by allowing these people to enter their home, unlicensed, and in some cases, with criminal histories. Let this be a warning to criminals who come into our community and illegally solicit services, that their behavior will not be tolerated.”

“For over five years, DBPR has partnered with the Sarasota County Sheriff’s Office, the Florida Department of Financial Services Division of Insurance Fraud, and the Sarasota County Building Department to bring down unlicensed contractors in Florida,” said DBPR Secretary Jonathan Zachem. “This continued, strong partnership is integral to DBPR’s mission to protect the public from unlicensed contractors and to uphold the integrity of the construction profession.”

“The (MSBIA) Manatee-Sarasota Building Industry Association continues to applaud the efforts of Sarasota County Sheriff Tom Knight in the aggressive pursuit of unlicensed and unpermitted activity in Sarasota County,” said MSBIA CEO Jon Mast. “The actions of the Sheriff’s office helps to protect the health, safety and welfare of the community from unscrupulous handymen impersonating legitimate licensed contractors. By defending unsuspecting homeowners in this way proves the Sheriff is focused on protecting the citizens of Sarasota County from being robbed of their money, shoddy work and peace of mind.”

Florida law sets specific rules and guidelines for obtaining professional licensure, and the people who have met these requirements are held to professional standards. Consumers can verify licenses with the DBPR online at www.myfloridalicense.com, by calling 850-487-1395, or downloading the free DBPR Mobile app through iTunes or the Google Play store.

To check a Sarasota County license, call the Customer Service and Permit Center at 861-6678 or 861-3029. To report someone you suspect is acting as an unlicensed contractor or performing work without a permit, call 861-5000. For more information visit https://www.scgov.net/government/departments/planning-and-development-services/building-division/contractor-licensing

Licensed and Insured! That’s what it said in his advertisement. We hear about this all too often: contractors claiming to be licensed, but can they perform the scope of work you are requesting for your home renovation project? Hiring an unqualified, unlicensed contractor can lead to headaches and lost money. This is why the Better Business Bureau (BBB) and Florida Department of Business and Professional Regulation (DBPR) remain partnered to help Floridians avoid falling victim to unlicensed contractors.

Together, BBB and DBPR have the tools to help consumers find licensed professionals they can trust. Remember to look for the BBB Accredited Business Seal when choosing a contractor. The seal indicates contractors are properly licensed and have been vetted against BBB’s Standards for Trust, including a commitment to be responsive, advertise honestly and honor their promises. Always verify a contractor’s license by visiting www.myfloridalicense.com, calling (850) 487-1395 or downloading the free DBPR Mobile app.

Your BBB provides information on how to find properly licensed professionals, including an easy-to-use checklist.  Resources to help businesses build trust in the marketplace are also available at your local BBB office. Please visit the BBB website and click on the Better Business Bureau serving your area for more information.

The Department of Business and Professional Regulation’s mission is to license efficiently and regulate fairly. DBPR licenses and regulates more than one million businesses and professionals ranging from hotels and restaurants, real estate agents and accountants to veterinarians, contractors, and cosmetologists. More Information about DBPR is available online at www.myfloridalicense.com. Also, follow @FloridaDBPR on Twitter or Florida Department of Business and Professional Regulation on Facebook for updates about license cycles, events, and other important news.

This week is Hurricane Preparedness Week.

BBB is encouraging Floridians to act now to prepare their homes and businesses for what is predicted to be a busy 2018 hurricane season. Taking preventative actions now may prevent irreparable damage in the future.

We are encouraging Floridians to create a plan that outlines what to do before, during and after a hurricane.

In the event of a natural disaster, we would like to remind Floridians that any repair work performed on a home or business should be completed by a licensed professional. Unlicensed contractors often will travel from out of state to a disaster area attempting to take advantage of uninformed consumers. The best way to prepare is to be proactive in selecting a properly licensed contractor and to use good judgment with sales calls, door-to-door pitches or low prices that appear too good to be true.

Disaster victims should never feel pressured to make a decision by an unknown contractor. Start with trust and look for the BBB Accredited Business Seal. For reliable information, lists of BBB Accredited Businesses by industry and BBB Business Profiles you can trust on local businesses, visit www.bbb.org.  Always verify a contractor’s license by visiting www.myfloridalicense.com, calling (850) 487-1395 or by downloading the free DBPR Mobile app.

About DBPR
The Department of Business and Professional Regulation’s mission is to license efficiently and regulate fairly. DBPR licenses and regulates more than one million businesses and professionals ranging from hotels and restaurants, real estate agents and accountants to veterinarians, contractors, and cosmetologists. More information about DBPR is available online at www.myfloridalicense.com. Also, follow @FloridaDBPR on Twitter or Florida Department of Business and Professional Regulation on Facebook for updates about license cycles, events, and other important news.

TALLAHASSEE, Fla. – Today, Governor Rick Scott announced that the Insurance Institute for Business & Home Safety (IBHS) has released the new edition of its Rating the States report, ranking Florida No. 1 for strengthening residential building-code systems. The state-by-state assessment, previously issued in 2012 and 2015, ranks 18 states most vulnerable to catastrophic hurricanes along the Atlantic Coast and Gulf of Mexico. The report is intended to focus attention on the need for strong, statewide building codes and identify steps states can take to improve their building-codes.

Governor Scott said, “In Florida, we know how important it is to be prepared for hurricanes while doing everything possible to keep families safe. Florida’s building codes have consistently ranked among the strongest in the nation and I’m proud that we have now been ranked first for building code strength by the Insurance Institute for Business & Home Safety.”

Florida Department of Business and Professional Regulation Secretary Jonathan Zachem said, “As reflected in the IBHS report, the importance of effective, well-enforced building codes was demonstrated in our state during the 2017 hurricane season. I’m extremely pleased that the state of Florida was ranked first on this landmark report.”

IBHS CEO and President Julie Rochman said, “States with strong, updated codes saw stunning proof this year in Florida that updated, well-enforced building codes have led to the construction of homes and buildings that can stand up to fierce hurricane winds. It can’t be any clearer: these codes work.”

To view reports and learn more about the Rating the States study, click HERE.